I used to think of Paris as this over-commercialised, over embellished city; void of the culture, depth and intricacy that surrounded it and made France the beautiful country it is.  Une ville uniquement pour des touristes. I couldn't stand the types of people who bought into all the hype and tried to claim Paris as this luxurious, high-class place just because Gossip Girl filmed an episode or two there and so, for the longest time, I couldn't stand the thought of visiting the city.

But I guess that paradigm was hypocritical, because in maintaining that ideology, I was also choosing to believe that Paris was only limited to what I saw on television, in magazines and in the eyes of other people. It was also ironic, because three weeks ago when I finally decided I needed to experience this city for myself, I loved it.

I did some touristy things and I did some not so touristy things: L'Arc de Triomphe on the back of a motorbike, La Tour Eiffel via the staircase, the Mona Lisa at le Musée du Lourve, The Persistence of Memory at the Salvador Dali exhibition, ice-skating in the middle of Hôtel de Ville, Notre Dame, Sacre Coeur and a walk up the famous Champs Elysées.

Funnily, it was the small things that I loved the most...


So there it is, there's more to Paris than expensive fashion, elitism and romantic clichés. It is definitely a stunning city and I see myself making a few more trips there before my year in Europe is up.

Posted by sarahabroad at 10:24 No comments:


In all this light, all I feel is dark,
Had the sun without it's warmth.
I'm freezing.

Posted by sarahabroad at 13:21 No comments:

So this is my life. And I just want you to know that I am both happy and sad and I'm still trying to figure out how that could be.


Perks of being a wallflower, Stephen Chbosky
Posted by sarahabroad at 14:08 No comments: 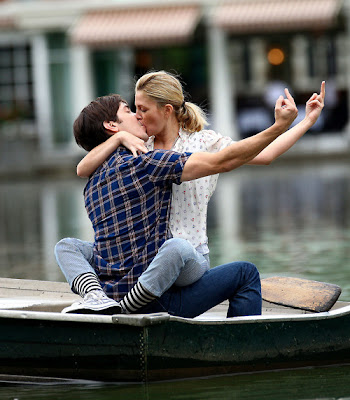 Posted by sarahabroad at 14:05 No comments:

So I've been M.I.A for a while. Most of my days have been preoccupied by the usual; the routine of university, cooking, cleaning and mes devoirs, the emotional struggle that normally encumbers my time and the occasional deep contemplation of life. I still haven't figured anything out yet but I will get back to you when I do. So far, one thing that has really stuck with me is reading something along the lines of, 'Nothing anybody does is because of you, it's a reflection of themselves'. I wish I could remember where I read it, because I think it would've saved me a lifetime's worth of frustration, resentment and exasperation if I had only known it sooner.

Posted by sarahabroad at 13:54 No comments:

Posted by sarahabroad at 10:48 No comments: